A History of Education in the San Geronimo Valley

Why is the Lagunitas School District in the town of San Geronimo? When did the Valley get its first school? These are some of the questions that this brief history of education in the SGV will try to answer.

Beginning in the late 1700s, Spain began to colonize California, and so soon education for the Coast Miwok took the form of conscription into the Spanish (later Mexican) mission system at Mission San Francisco Solano and Mission San Rafael de Archangel, where Coast Miwok people learned Spanish and Latin, and came into contact with members of tribes from around the Bay Area - each with their own languages. Conditions were harsh at the missions and not at all like the life that existed before the tight-knit Coast Miwok communities were heavily impacted. The first colonial family to live in the San Geronimo Valley was that of a Mission San Rafael soldier named Rafael Cacho. He and his family lived in an adobe home in the area of the Flanders ranch of today. Mission San Rafael was surely his family’s destination for education and social gatherings. Not long after receiving the land grant in 1837, Cacho sold Rancho San Geronimo to Joseph Warren Revere (grandson of Paul Revere) and relocated to Sonoma. 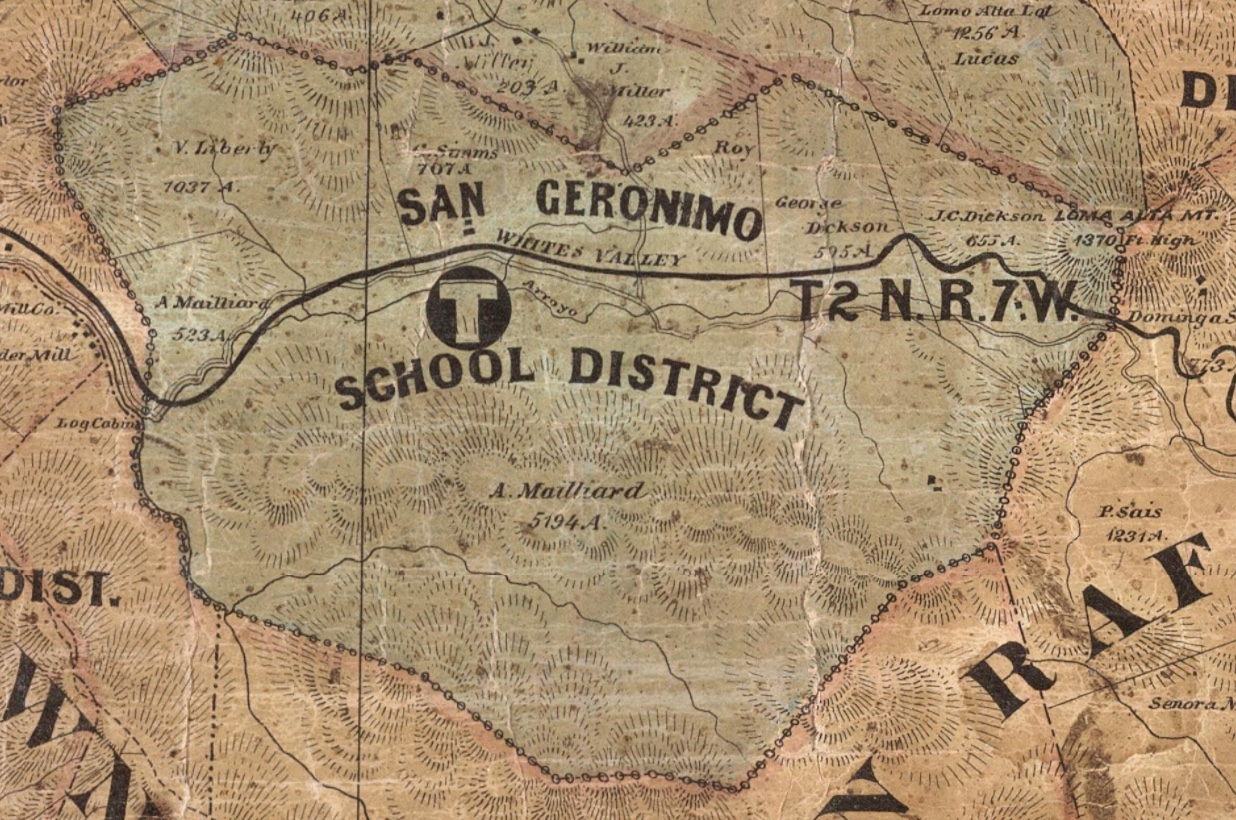 The kind of growth needed to support public education did not occur in the Valley until the mid 1850s, with the arrival of settlers from the East Coast - some of whom, like brothers William, David, and John Dickson, have descendants who are still in the Valley today! With a growing population of farm families, the Valley needed schools. But in those days, attending school for children from families like the Dicksons and Roys (the namesake of Roys Redwoods) meant a trip on horseback up and over Dickson Ridge and down into Nicasio Valley. Nicasio had a larger population than the San Geronimo Valley at the time - and was even being considered for the county seat alongside San Rafael. Their growing population warranted a schoolhouse, and so in 1866, the Nicasio School District was formed. A year later the first Nicasio schoolhouse was built, and Valley children were the beneficiaries, too.

This travel burden must have eventually been too much for Valley families, and coupled with the steadily growing population, a decision was made five years later to incorporate a separate school district for the San Geronimo Valley, in 1872. This district was aptly named the “San Geronimo School District” and its boundaries were more or less the boundaries of the Rancho San Geronimo land grant that Rafael Cacho, the first Mexican land grantee, had received in 1837, with Whites Hill at the east, Dickson Ridge at the north, Pine Mountain at the south, and Mt. Barnabe as the western boundary. Just before this, in 1871, Nicasio built a larger schoolhouse for itself that still stands today as a private residence directly adjacent to the new Nicasio school complex.

Though the San Geronimo School District was incorporated in 1872, it did not have a schoolhouse of its own until 1875, when tax revenue paid the $1,000 cost of constructing the 30x20 foot one-room schoolhouse that sat not too far from the Two Bird Café property of today on San Geronimo Valley Drive (then the County Road.) This new schoolhouse seems to have been an important gathering place for the Valley’s farm families, with social dances and weekend religious services hosted there on evenings and on weekends.

Another early mention of this new school district was in the summer of 1875, when the Marin Journal (a precursor to the Marin Independent Journal) shared some highlights from the month of June at the district’s one schoolhouse. The Journal reported an enrollment of 15 students, with an average daily attendance of 12. A familiar family name appeared on the honor roll, with Edwin Dickson receiving top marks for behavior, and Mary Dickson receiving the same for spelling. The district's first teacher appears to have been a woman named Corrie Stowell, though one Ms. Barr appears to have taken over by 1878. 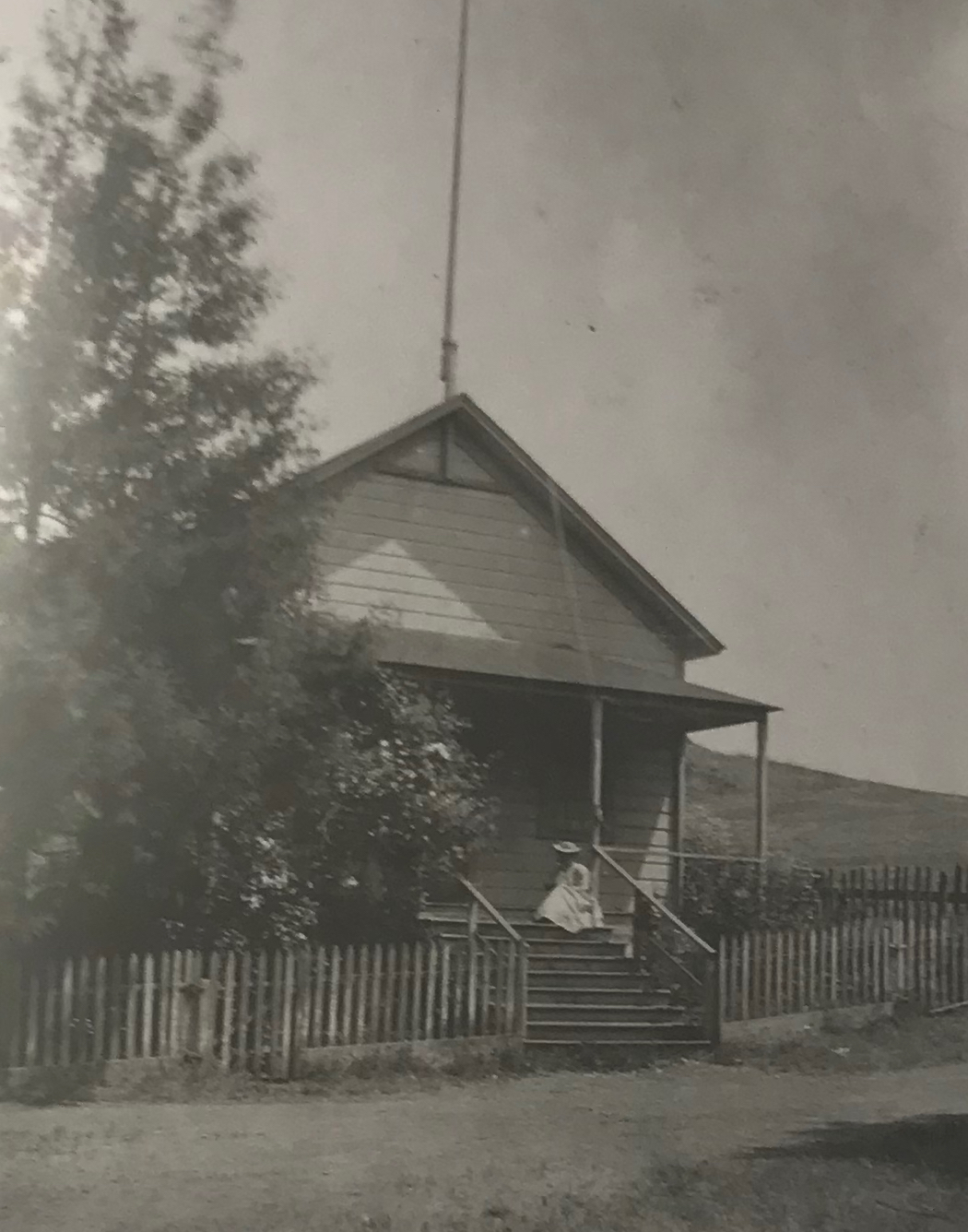 Also noted in the same issue of the paper was the election of Adolph Mailliard as a trustee on the school board. Adolph was the son of Joseph Bonaparte’s squire and right hand man, Louie Mailliard. This connection to royalty and some accumulated family wealth made Adolph the Valley’s first “gentleman farmer,” but he was a relative latecomer to the area and to the trade, in comparison with the Dickson family, who had arrived in San Geronimo as early as 1856, and who were experienced dairymen, having arrived from Vermont where their family was engaged in farming and ranching. In 1881 Thomas Roy and William Dickson served as trustees on the San Geronimo school board. There were a handful of other families in the area by this time, but the Dicksons, Roys, and Mailliards were the largest landowners, and the most prominent community members.

West of Lagunitas, in Taylorville - the paper mill town named for Samuel P. Taylor that grew to over 100 residents at its peak in the late 1800s - the children of papermill workers traveled a short distance north up the course of Lagunitas creek to Tocaloma School, where a one room schoolhouse much like the Valley’s first in San Geronimo provided public education from the incorporation of the Tocaloma School District in 1884 through its dissolution in 1927. The building sat at the entrance to the Cheda Ranch (Cheda Ranch Road) on the east side of today’s Sir Francis Drake Boulevard.

But how did the Lagunitas School District begin, and where did it get its name?

It’s unclear why exactly the San Geronimo School District dissolved in 1902, but it was replaced six years later - in January of 1908 - by the Lagunitas School District, not long after Lagunitas had become the Valley’s first true residential subdivision in 1904. The heirs of Adolph Mailliard had begun to divide their family’s land to pay off their father’s debt, and Lagunitas Road, Spring Street, and West Cintura Avenue became some of the Valley’s first residential pockets. It seems that new residents at the west end of the San Geronimo Valley wanted a school closer to this new population center, and so the Pedrini brothers of Lagunitas were the builders of a new one room schoolhouse on West Cintura Avenue that served the district. The home still stands today in the same location as part of a private residence. 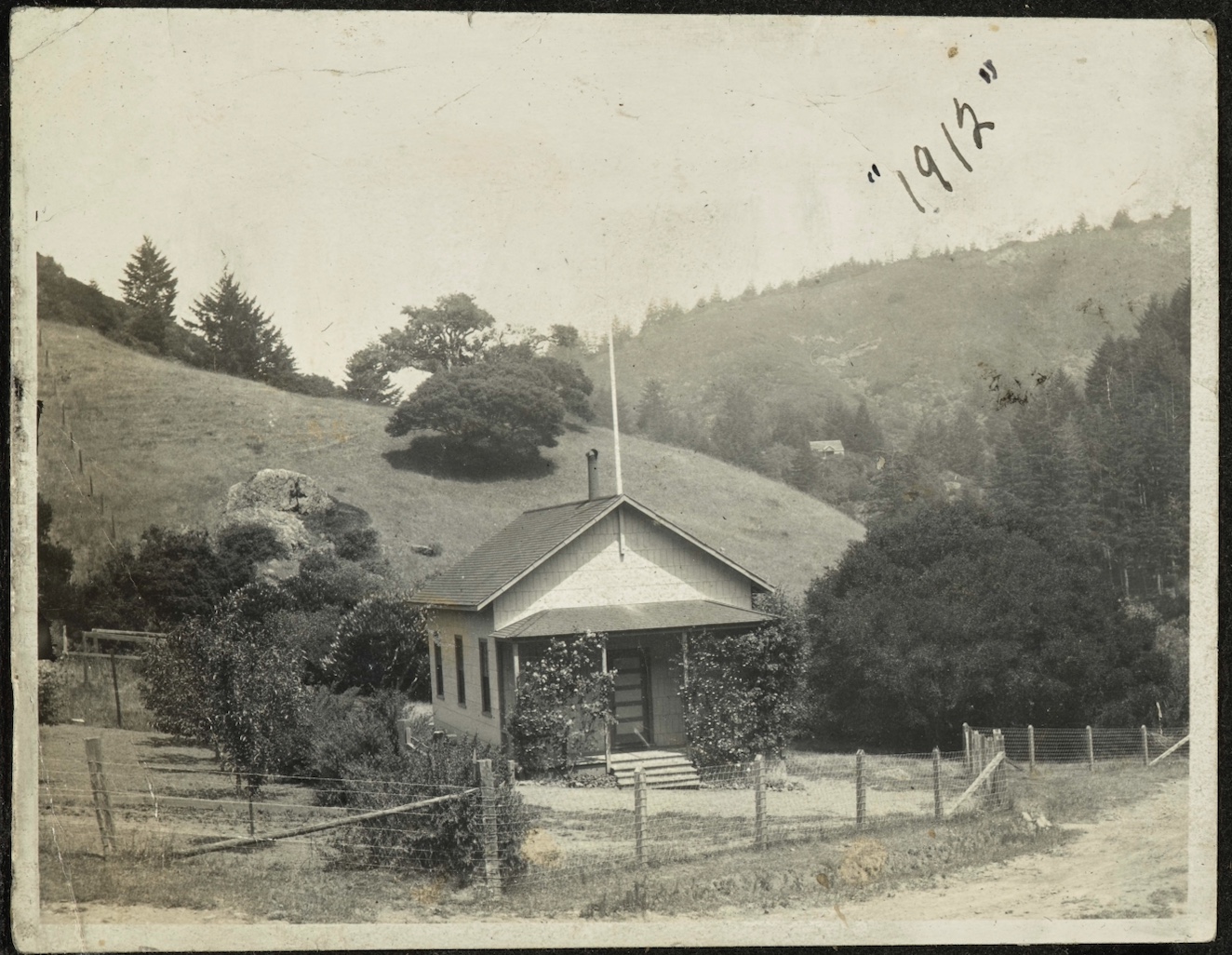 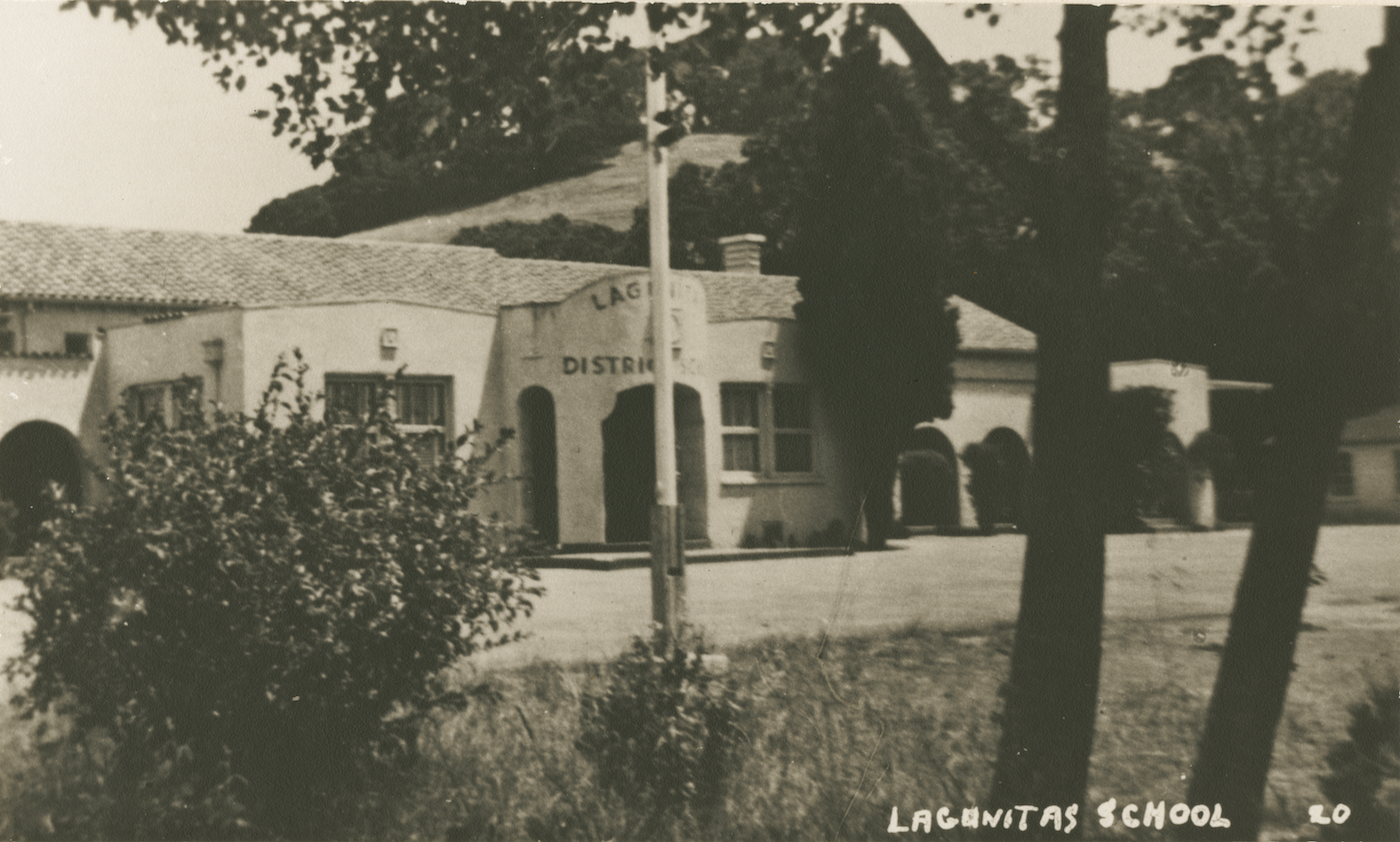 Papers of the day do not report much on the happenings of the district until 1927, when the district had outgrown its one room schoolhouse and plans were in motion to build a new frame and stucco mission-style schoolhouse on land to be donated by the Garzoli family, who owned all of what is now the French Ranch development and former San Geronimo Golf Course “back nine.” Architect and builder Alfred Y. Williams designed and oversaw construction of the schoolhouse, which was completed in 1929 following the 1927 donation acreage from the Garzolis.

The Lagunitas School District outgrew the 1929 schoolhouse that is now the San Geronimo Valley Community Center not long after its construction, but more facilities were not added until 1967, when the stucco building became unusable as a schoolhouse due to earthquake safety concerns - following the passage of the Greene Acts (building upon the earlier Field Act.). Various possibilities were considered for the 1929 building - one contingent advocated for a Marin County Sheriff Department substation in the building, while another faction pushed for the creation of an arts center. Ultimately, the advocates of the art center won out, and the building was leased out by the school district to the arts center and its contingent for $1 a year. The arts center became the San Geronimo Valley Cultural Center, and then the San Geronimo Valley Community Center that we know today.

The Montessori Program at Lagunitas began in 1981 and continues to this day. So does the Open Classroom program, which was formed in 1970 and had its first multigrade class in 1971.

The San Geronimo Valley Community Gym was built with private foundation, county, state, and donated funds, and was a dream made possible through decades of work by school, Community Center, and community members. Groundbreaking for the construction began in the summer of 2007, and the gym was completed in summer 2009.

Today the Lagunitas School District land is home to not just the district’s two campus, but the Community Center in its longtime headquarters, West Marin Montessori - which relocated from the Woodacre Improvement Club in 2016, and a classroom run by the Marin County Office of Education in the former Marin County Free Library branch. In normal times, the SGVCC runs its VAST tutoring program from the Lagunitas Montessori Program complex, and its Loft program from the upstairs of the Community Gym. What comes next for the district is an open question, but whatever it is will be built upon the foundation of nearly 150 years of community-supported public education in the San Geronimo Valley.

For much more on the history of the Lagunitas School District from the 1960s onward, explore the pages of the San Geronimo Valley Community Center’s 50th Anniversary Community Guide here.